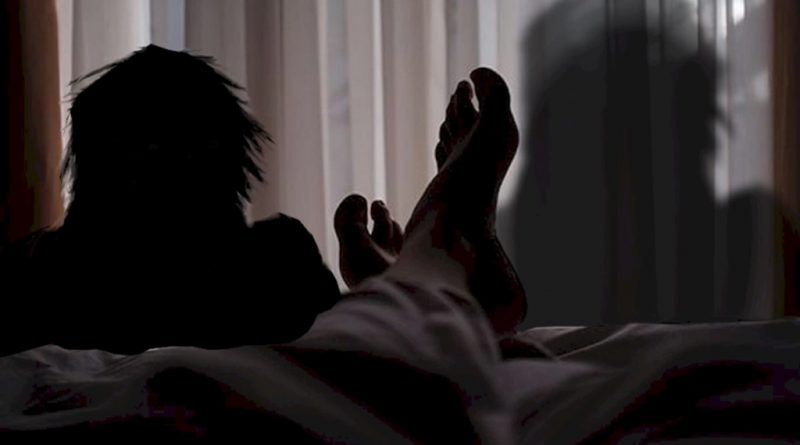 The nocturnal, paranormal visitation to Eliphaz, one of Job’s friends, is something which is often glossed over in the attempt to interpret the book of Job as being about suffering. However, if we unpack this particular visitation, we may gain a deeper insight into the way “the satan” character in the Divine Council was able to influence the friends of Job, and why they were so particularly useless in helping him through his suffering.

The book of Job briefly describes a night visitation of a spirit (ruach) to Eliphaz, one of Job’s friends:

12 ‘Now a word came stealing to me,
my ear received the whisper of it.
13 Amid thoughts from visions of the night,
when deep sleep falls on mortals,
14 dread came upon me, and trembling,
which made all my bones shake.
15 A spirit glided past my face;
the hair of my flesh bristled.
16 It stood still,
but I could not discern its appearance.
A form was before my eyes;
there was silence, then I heard a voice…

The text suggests that Eliphaz is awake, pondering some of the visions that he had that night, though he may be in a semi-sleep / hypnagogic, trance-like state where he’s aware of his body’s reactions.

The spirit glides past his face, making his hair bristle. This again is a response to something “other” when encountered. Goosebumps are the hair follicle muscles raising hairs on our skin in a response to extreme emotions or cold (piloerection). For temperature, it’s about trapping a layer of insulating air over our skin to keep us warm. For emotion, the general idea is that, like a cat whose hair stands on end when it’s scared, making it look bigger, this is a similar process with humans, left over from when we had a lot more hair on our bodies [1]. Sometimes infrasound (sounds with frequencies below our hearing range) in an area can create goosebumps and is nothing to do with anything paranormal being present [2].

Harding [3] suggests that the Hebrew meaning of this could be translated as ‘a storm made my flesh bristle’, which is a phenomenon due to electrostatic charge. It is common belief in paranormal investigation groups that electromagnetic effects are present in the lead up to manifestations of paranormal phenomena.

However in this case, Eliphaz has seen something unnatural, really close up to his face, and his body’s unconscious reaction is to be fearful, causing piloerection. That the spirit gives a message suggests this is not a natural phenomena eliciting the response from Eliphaz’s skin.

Whatever, the fact that Eliphaz notes a response in the hair on his skin suggests this was not whilst he was asleep.

This spirit but would not reveal itself fully, it merely appeared as the shape of a figure, possibly a mere mass shaped as a person (the Hebrew word tem-oo-naw’ means an representative likeness, as well as phantom [4]). Whatever it was, it didn’t want to identify itself to Eliphaz, which begs the question, if it was a messenger from God, surely it would have identified itself as such so that the recipient knew that the source was trustworthy, as in many other Scriptures where this is the case?

Spirit from Yahweh – Holy or Unholy?

We are often led to believe that spirits which are sent by God to give messages to humans are holy and convey truth. However, this isn’t as clear cut as we are taught. Apart from God sending people into a powerful delusion as a judgement for their behaviours (2 Thessalonians 2:11) there is the strange incident involving Micaiah, a prophet hated by King Ahab because he only seemed to prophesy doom and gloom (1 Kings 22:19-23). Micaiah sees a vision of the Divine Council in which Yahweh has determined that King Ahab must die in battle at Ramoth-gilead, and he needs to be at that place at the right time. Yahweh shares it with the rest of the members of the Council and they discusses how they might go about achieving this task . A lying spirit comes forth into the presence of Yahweh (much like Job’s Satan character appears in Job 1:6,7), and offers to go and be a lying spirit in the mouths of the king’s prophets, tempting him into battle where he’ll be slain. Yahweh and the Council agree this should be the way Ahab is orchestrated to appear at the place of his death. Yahweh then, acting like Jean-Luc Picard of the U. S. S. Enterprise, effectively says to the lying spirit: “Make it so!” (v 22).

Was this a truthful or lying spirit from God, or another front in the testing of Job’s faith? With the identity of the visiting apparition in doubt, one can only make an attempt to identify it by the content of its message to see whether it is true, fruitful and in alignment with the existing revelation of God to us. This is slightly difficult in that Job is considered one of the oldest books in the Hebrew Bible, and Harding explains that a contextual analysis requires knowledge of a variety of materials outside of the book which are contemporaneous with the text’s composition [5]. Harding suggests that, upon exploration of the text, there lie a few different ways it could be read, depending upon which verses from the rest of Scripture one chooses to back up one’s argument [6]:

As such, one cannot say with exegetical certainty that one of these is the correct interpretation. However, after a highly technical analysis of the Hebraic terminology used in the passage, Harding suggests that there is still considerable ambiguity regarding the identity of the originator who spoke revelation to Eliphaz [7].

Eliphaz himself is is no doubt as to the originator of the message being from God (see Ch 15) where he also hammers home the point that humans can never be any good in God’s eyes (4:17-18). Job listens and seems to agree with some of this revelation, buying into the narrative that Eliphaz is setting, based upon his nocturnal revelation. However, when God steps into the conversation in 42:7-8, we learn that Job’s friends have been not been speaking God’s truths. Thus we can confidently say that whatever spirit spoke to Eliphaz and caused him to speak out against Job, was not a truthful spirit from God.

The book of Job contains much about the spirit realm at the start and a peek into the Divine Council where the satan (“accuser for the prosecution”) was still allowed to attend and was permitted to put Job to the test regarding his trust in God. We have often thought the way that Job was tested was the misfortunes that befell him, relegating his friends as merely unhelpful advisers. However a key understanding of the identity of the spirit which appeared to Eliphaz in chapter 4 helps us to see why his friends were so useless in their spiritual direction with him, despite sounding quite deep theologically. The testing of Job was not just the direct action against him, his family and his belongings, but also the subtle attacks given through incorrect advice about the nature of God and his dealings with humans.

Based upon half-truths, Eliphaz’s version of God is a monster who seeks to punish humans. How many times is that accusation brought to bear against Christianity, sometimes based upon the hellfire and damnation preaching of certain sects, or the well-meaning but misapplied words of “Well, God’s ways are higher than our ways” in the midst of disaster all around. Or perhaps as subtle as “God wanted another angel for his own” in the attempt to bring comfort to someone grieving and angry at the loss of their loved one.

There are certain Church traditions where prophecies are spoken over congregations or given to people privately those who either have announced themselves as prophets, or who have been recognised by their church as prophets. Sometimes these pieces of ‘advice’ come in the form of “You gotta have more faith”, “This happened because of your lack of faith”, “Healing / wealth didn’t happen because of your lack of faith”, or even “You are a failure / lowly maggot worm, God wants nothing more to do with you.”

Where is the testing of these ‘words of knowledge’ / prophecies, or do we blindly accept these words simply because the one who spoke them claims they are the direct words of God or has an official church label as prophet? Here we see there is the potential for even a prophet to be deluded about the source of their revelation, and it might be coming from either ego, or something more nefarious, even though it sounds like truth at the time.

Test every word of someone who purports to bring a revelation from the spirit realm (even God, who encourages us to test his words), for not every spirit comes from God (1 John 4:1-3).

[1] Some of us still have a plethora of hair on our bodies; for others, it sometimes slips from the top of our heads to our chins ;).

Matt Arnold holds a Distinction grade Master of Arts (Pioneer Ministries / Fresh Expressions), with a prize winning dissertation (82%) entitled "Paranormal Hauntings and Applications in Deliverance Ministry". He is editor of The Christian Parapsychologist Journal and researcher and writer on haunting phenomena from a scientific and biblical / Christian perspective.

Praying for the Dead

Praying for the Dead: Reasons Why We Can

Praying for the Dead?

Astral Travelling in the Bible … & Beyond

The Out-of-Body Experiences of Jesus